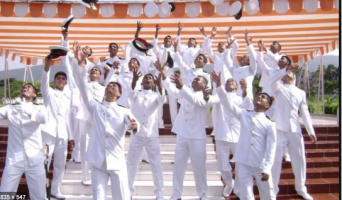 Indian navy is conducting an online exam INET (Indian Navy Entrance Test) for the first time for officer aspirants. Candidates who want to join the Indian Navy through INET can find more details below. Applications are invited from unmarried eligible men & women candidates for grant of Permanent Commission (PC) and Short Service Commission (SSC) in under-mentioned branches / entries in the Indian Navy for course commencing Jun 20 at Indian Naval Academy (INA) Ezhimala, Kerala. Candidates must fulfill conditions of nationality as laid down by the Government of India.

Batches Start from 3rd and 18th of EVERY MONTH

Fee Concession of 70% for Wards of Martyrs of Armed Forces.

This Exam will be held twice a year in March and September.

Para 2 (a) - (e) & 2 (h) & 2 (j). The candidates will, however be required to pass final examination (BE/B Tech) with minimum 60% before joining INA. The candidates failing to meet minimum cut off %age will not be permitted to join INA Ezhimala.

(b) Candidates who have completed their degree on the date of filling the application can apply for all Branches / Entries.

Note: - (i) Only one application is to be filled by a candidate. (ii) Candidates who are eligible for more than one Branch/Cadre should mention their preferences in the application so as to be considered for other choices in case slots for SSBs in entries of

their first choice are filled. (iii) Candidates will be shortlisted for SSB based on their INET rank and their preference of choice.

(iv) However, if not shortlisted for the first preference you may be considered for alternate Branch/Cadre subject to

availability of spare slots in SSB batches of that Branch/Cadre. (v) Once shortlisted for a Branch/Cadre, subsequent stages of selection process (SSB, medicals & meriting) will be exclusively for that Branch/Cadre only. (vi) No equivalent stream of BE/

B.Tech other than that mentioned in para 2 above will be considered valid for selection process at any stage.

Medical Standards. All candidates recommended by SSB will have to undergo medicals as per extant regulation.

There is no relaxation in medical standard on any ground.

Relaxation in Height and Weight. Relaxations in height is permissible to candidates holding domicile of specific

regions details of which are available on Indian Navy website

along with other facilities & privileges are available on Indian Navy website www.joinindiannavy.gov.in

. Group Insurance & Gratuity. A basic insurance cover of Rs. One Crore (on contribution) and gratuity will be

granted to the officer as per extant rules in force.

. Leave Entitlements. On Commission, officers are entitled to Annual and Casual Leave as per extant regulations.

Leave during training period will be as per the Training Policy in force.

(b) Permanent Commission. Candidates inducted under PC will have to serve for a minimum of 20 yrs for

pension and thereafter can continue to serve till the age of superannuation.

. Duties of Officers. Please visit website www.joinindiannavy.gov.in for information on duties of officers for

. Selection Procedure The selection procedure is as follows:-

(i) Examination Centre. All candidates, whose applications are received by due date, will be called for

indicating date, time and place, which is scheduled during Aug 2019 would be required to be downloaded

from the official website www.joinindiannavy.gov.in tentatively by second week of Jul 19. Only Electronic

mode of communication will be used while contacting the candidates at all stages of selection.

(ii) INET Syllabus. INET exam will be of two hours duration. It will contain 100 Multiple Choice

Mathematical Aptitude & General Knowledge. Each section will be of 100 marks with negative

marking of one mark for incorrect answer.

(b) Shortlisting for SSB. IHQ of MoD (N) reserves the right to shortlist candidates strictly on the basis of INET

considered for shortlisting to appear in SSB interview. No communication will be entertained on this account.

entries. Shortlisted candidates will be informed about their selection for SSB interview on their e-mail or

through SMS (provided by candidates in their application form). Candidates are advised not to change their

e-mail/mobile No till selection process is over.

(c) SSB Procedure. SSB interview will be conducted in two stages. Candidates who clear Stage I will go to

Stage II. Those who fail in Stage I will be sent back on the same date. Details of SSB procedure are available

(i) Merit list will be based on combined marks of INET & SSB.

required to pay a fee of Rs 205/- (Rupees Two Hundred five only) through online mode. Admit card will be

are entitled to waiver of examination fee.

Candidates will be inducted as officers in the rank of Sub Lieutenant. Officers of all branches / cadres except the officers of

Course at the Naval Academy, Ezhimala. This will be followed by professional training in Naval Ships and Training

Establishments as per extant regulations.

(a) Probation period for SSC (NAIC) Officers is three years and for officers of other branches/cadres is two years. The

of SSC (NAIC) and two years for other branches / cadres or on completion of initial training (whichever is later. During

probation the officers are liable to be discharged in case of unsatisfactory performance at any stage.

(b) Only unmarried candidates are eligible for training. Any candidate who is found to be married or marries while under

expenditure incurred on the candidate by the Government.

(c) If the officer voluntarily withdraws from initial training or resigns during the probationary period, he/she shall be

required to refund the cost of training in whole or in part, as may be determined by Govt.& all money received by him/her

as pay & allowances from the Govt. together with the interest on the said money calculated at the rate in force for Govt

Candidates are to register and fill application on Indian Navy website www.joinindiannavy.gov.in. The candidates can

Online (e-application). Whilst filling up the e-application, it is advisable to keep the relevant documents readily available to

( a ) C o r r e c t f il l i n g up of personal particulars. Details are to be filled up as given in the Matriculation Certificate.

(b) Fields such as e-mail address, mobile number are mandatory fields and need to be filled.

conversion formula for BE/B.Tech, Commercial Pilot Licence(CPL) issued by DGCA, Government of India, and a recent

passport size colour photograph should be scanned in original JPG/FITT format, for attaching the same while filling up the

(d) If any scanned document is not legible/readable for any reason the application will be rejected. Candidates are to take

print out of application and carry it while appearing for INET or SSB interview.

IMPORTANT - Please read the instructions given on the website carefully before submitting your ‘e-application’ form.

from Monday-Sunday between 0800-2000 hrs regarding INET and SSB interview.

NOTE : Your application is subject to subsequent scrutiny and the application can be rejected, if found

INELIGIBLE/INVALID at any point of time.

guidelines only Details are also available on website: www.joinindiannavy.gov.in

Synonyms and Antonyms – Synonyms mean the words which have the same or nearly the same meaning as another word or other words in a language. An Antonym is the opposite of another word. For example, the Antonym of day is night.

Cloze Test – This test consist of a passage with blanks and we have to complete the reading by filling up the blanks. Students should focus on reading the passage very carefully and then you’ll be able to figure out the right or appropriate words to be filled.

Fill in the blanks – Under this topic, you are required to find a suitable word to fill in. It constitutes questions which have only blanks. Remember to read the statement carefully and choose the most appropriate option.

Spelling Test – Spelling skills can be improved mainly by putting in efforts like looking up a word you’re not sure of, keeping the dictionary at hand, keeping a list of words you know you have trouble with.

Sentence or Phrase Improvement – In terms of vocabulary usage, this topic means using appropriate words or phrases to improve the senctence given in the question.

Fill in the blanks – This section is dedicated to target or find a suitable word to fill in. It constitutes questions which have only blanks.

Sentence Rearrangement:Sentence rearrangement is an important part of the English Language section in various competitive exams. It consists of a group of jumbled up sentences. The goal is to rearrange the sentences in the original sequence. Questions from this section can be asked in the form of various sentences and various paragraphs.