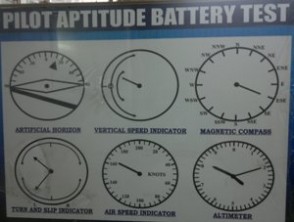 In addition to normal SSB, candidates who have opted for the Flying Branch of the Air Force have to compulsorily undergo Pilot Aptitude Battery Test. This test is conducted at all the Air Force Selection Boards at Mysore, Dehra Dun and Varanasi. A candidate is allowed only one chance in his lifetime to appear for this test. Once a candidate is rejected, he is deemed to be permanently unfit for selection into the Air Force in the Flying Branch. Likewise, a candidate who passes PABT but fails in SSB need not appear again for PABT when he appears for SSB next time.

The purpose of conducting this test is so ascertain whether the candidate has the requisite aptitude to become a Service Pilot. A pilot’s job is very demanding and it is very vital for him to posses the basic qualities like concentration, ability to undergo stress, ability to monitor and carry out various tasks at the same time, and also posses an analytical mind, good reflexes and coordination of limbs.

PABT is carried out in two phases- Written tests known as INS-B, and the Machine Test. We shall first deal with the written tests.

The written part of PABT consists of interpretation of cockpit instruments. You must understand that a pilot flies an aircraft basically by looking outside and taking reference from the visible horizon (the horizontal line separating the sky and the earth) to ascertain whether the aircraft is flying level, climbing, descending or, turning left or right. But during night due to poor visibility conditions, or while flying through clouds, the ground and the horizon may not be visible to the pilot. In these conditions, the pilot has to look inside and interpret the cockpit instruments   to determine whether the aircraft is flying level, climbing, descending, or turning to either side. The written test (INS-B) is designed to determine whether the candidate has the ability to monitor a number of instruments at one time and quickly interpret and extract the required information. It is conducted in two phases.

Phase-1 of the written test

You are shown pictures of six cockpit instruments, below which five statements are given. You are required to tick the correct statement which agrees with the readings of all the six instruments. There are 15 questions of this type, to be solved in 12 minutes. Let us now learn about the six instruments.

As the name suggests, this instrument indicates the speed of the aircraft in the air. It is graduated in miles per hour or kilometres per hour or in knots. As shown in the diagram, it has a dial and a needle. The needle moves clockwise as the speed increases and it indicates the speed of the aircraft. Reading the instrument is exactly like that of the speedometer of a car. For example, in the diagram below, the ASI is indicating a speed of 150 knots. Be careful to read the speed accurately.

This instrument indicates the Altitude or the Height of the aircraft above the ground. As shown in the diagram, it has markings from 0 to 9 calibrated in feet, and has two needles. The big needle shows height in hundreds of feet and the small needle shows in thousands of feet. The instrument is to be read like a clock. For example, in fig (1) the altitude of the aircraft indicated is 7900 feet, and in fig (2), the altitude indicated is 1280 feet. Actually, in the altimeters fitted in aircrafts, there is also a third needle (as in the figures below) which indicates height in ten-thousands of feet. But for the purpose of PABT, only two needles will be represented and the third needle is not mentioned.

This instruments indicates the direction in which the aircraft is turning and also whether it is a balanced turn (i.e. is the bank proper).

The upper half of the instrument has a pointer that indicates whether the bank is proper, less or more than required. The pointer shows the direction in which the aircraft is turning.

The Phase-2 of the written test

This phase will have only two cockpit instruments (Artificial Horizon and the Magnetic Compass) and, instead of five statements, five-three dimensional pictures will be displayed. The candidates are required to tick the correct pictures which agree with both the instruments. While solving this, the candidates are advised to first compare the pictures with magnetic compass and eliminate the ones that do not agree with the direction indicated by the compass. After short listing the pictures that agree with the magnetic compass, he must now compare them with the Artificial Horizon and tick the correct answer. Candidates must never try to first compare the pictures with the Artificial Horizon as it will be more time consuming. There will be 60 questions of this type which have to be answered in 20 minutes. You should remember that the aircraft going away from you in heading towards North and the one coming towards you is heading South.

There is no reason for a candidate to feel under confident or confused with respect to PABT. The examiner conducting the tests will first explain all the instruments thoroughly and also give practice by solving examples before conducting the written tests.

The Practical Tests or Machine Tests

These tests are designed to ascertain whether a candidate has the qualities like concentration, good anticipation and reflexes, coordination of limbs and ability to carry out various tasks at the same time. These tests are also conducted in two phases.

While doing the tests, candidates will be wearing ear phones and through these, a faint sound will transmitted at frequent intervals. Whenever the audio is detected, the candidate has to cancel (put off) the same by pressing the button provided on the stick within 3 seconds.

It can be seen that the tests are meant to determine whether a candidate has reflexes and can concentrate on various activities at the same time. The main objective for the candidate must be to keep the spot light within the square as long as possible. Putting off the lights and cancelling the audio are only meant to divert the attention of the candidate from the main screen. Therefore the candidate’s priority must be to keep his eyes focused on the computer screen and concentrate on controlling the spot light, and should switch off the lights and audio without removing the eyes from the main screen.
The duration of the test is for about five minutes. A candidate is given three chances, i.e., tested three times, and only his best score is considered.

The second test is a simple test to determine whether a candidate has anticipation and coordination of limbs.

When the test starts, the track on the screen will start moving down and the candidate will get the impression of moving along a road (like in a computer game). With the help of the stick he has to control the spot light and keep it along the curves of the track without letting it leave the track. It is like driving a car along a road. Longer the spot light moves along the track, the more marks he is able to score. He will be penalized in terms of marks if the spot light leaves the track.

The duration of the test is for about three minutes. A candidate is given three chances, i.e., tested three times, and only his best score will be considered.