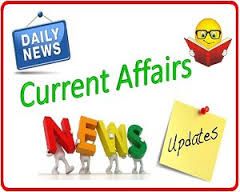 1. The South Asia Satellite has been launched by the Indian Space Research Organization ISRO successfully. The communication satellite on board the launch vehicle “GSLV R-Zero Nine” lifted off from the second launch pad of the Satish Dhawan Space Centre at Sriharikota at 4.57 pm on 5th May and reached the geosynchronous transfer orbit. The South Asia Satellite has 12 Ku band transponders meant for communication purposes. They can also be used for broadcasting services, tele-medicine, tele-education and disaster management. The total cost of the satellite mission has worked out to be 450-crore rupees including 235 crore rupees for the satellite alone. As Prime Minister Modi had announced earlier, it is a gift by India to its neighbours. Six of India’s neighbours including Afghanistan, Bangladesh, Bhuran, Nepal, Srilanka and the Maldives have participated in the project. Pakistan pulled out of the project.

2. The Supreme Court has upheld the conviction and death penalty by the Delhi High Court to the four convicts Mukesh, Akshay, Pawan and Vinay in the 16th December 2012 Nibhaya gangrape and murder case. A three-judge bench headed by Justice Dipak Misra wrote two separate but concurring judgements in the case. It noted that victim’s dying declaration is consistent as it has been proved beyond doubt and corroborated.

4. A deal unveiled by Russia’s military to set up safe zones in Syria has come into force. The four zones will remain in place for six months. The accord on the zones was reached during talks in Kazakhstan between Russia and Iran which back Syrian President Bashar al-Assad. Turkey, which supports Syrian rebel groups, agreed to act as a guarantor.

5. The Reserve Bank of India (RBI) has made substantial changes in the norms for dealing with stressed loans and warned banks they will be penalized for missing Non-Performing Assets (NPA) resolution timelines. RBI, through a notification, eased the decision-making process in the Joint Lenders’ Forum and Corrective Action Plan under the ‘Framework for Revitalizing Distressed Assets in the Economy’. The apex bank also warned that any non-adherence to these instructions and timelines specified under the framework shall attract monetary penalties on the concerned banks.

6. The Union Government has declared entire Assam, besides bordering areas of Meghalaya, as a disturbed area, under the Armed Forces Special Powers Act (AFSPA), for three more months. In a gazette notification, the Home Ministry cited violence perpetrated by insurgent groups like ULFA, NDFB and others as the reason for enforcing AFSPA for three more months with effect from the 3rd May.

7. Nepal’s first woman Chief Justice Sushila Karki resumed office after the Supreme Court ordered her reinstatement and directed Parliament to put on hold the impeachment motion against the spirit of the country’s Constitution. The order came in response to writ petition against the motion. Justice Karki was suspended after an impeachment motion was registered in Parliament by ruling Nepali Congress and CPN (Maoist Centre).

8. The Asian Development Bank (ADB) has said that Indian Economy will grow 7.4 per cent this fiscal and 7.6 per cent in the next fiscal. India had grown 7.1 per cent in the previous fiscal.

9. Indian national football team has secured a 100th spot in the latest FIFA world football rankings. This is the first time in 21 years that India has been placed 100th alongside Nicaragua, Lithuania and Estonia with a total of 331 points.

11. Olympic silver medalist P V Saina Nehwal slipped a place each to be at the fourth and ninth spots respectively in the latest BWF World ranking released.