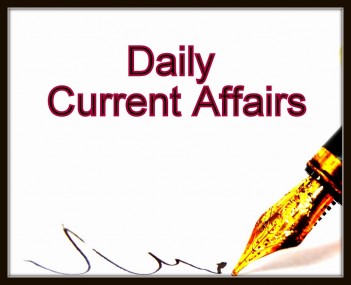 2. Union Minister M. Venkaiah Naidu has been named by the Bharatiya Janata Party led ruling alliance NDA’s candidate. for the post of Vice President Mr. Naidu will contest the elections slated on 5th August against the opposition’s candidate Gopalkrishna Gandhi.

3. In a sea-air coordinated search and rescue operation, the Indian Coast Guard rescued 11 crew members of Merchant Vessel ITT Panther, which sank in North-East part of Bay of Bengal, 400 km from Port Blair , according to a release from the Coast Guard. On receipt of distress message at Maritime Rescue Coordination Centre (Port Blair), Indian Coast Guard swiftly launched the rescue operation to save precious lives at stake.

4. Presently, there are 42 Indian satellites operational in orbit. Out of these, 15 satellites are used for communication, 4 for meteorological observations, 14 for earth observations, 7 for navigation and 2 for space science purposes. During FY 2016-17, the total revenue accrued from communication satellites through leasing of INSAT/ GSAT transponders is Rs. 746.68 crore.

5. External Affairs Minister Sushma Swaraj has said all countries support India’s stand on the Doklam issue. Replying to supplementaries during the Question Hour in the Rajya Sabha, she said, if China unilaterally changes status-quo of tri-junction point between India, China and Bhutan, it poses a challenge to India’s security.

6. The Indo-US nuclear deal has resulted in enabling import of fuel for reactors placed under International Atomic Energy Agency (IAEA) Safeguards and paved the way for setting up of large capacity Light Water Reactors (LWRs) with foreign technical cooperation. In this regard, the Government has accorded ‘in principle’ approval of five coastal sites and designated them for locating such reactors in cooperation with the Russian Federation, France & the USA. Two projects, KKNPP 3&4 (2X1000 MW) and KKNPP 5&6 (2X1000 MW), to be set up in technical cooperation with Russian Federation at Kudankulam, Tamil Nadu have been accorded financial sanction. Construction of KKNPP 3&4 has commenced.

8. NITI Aayog Vice Chairman Arvind Panagariya has said, India’s GDP could rise to about 8 trillion dollars over the next 15 years if the country registers an economic growth of 8 per cent annually. He said, with that level of economic growth, living standards and amenities that are taken for granted in the west will become accessible to a very large part of the population in India in the coming 15 years.

9. The Asian Development Bank retained India’s growth projection at 7.4 per cent for the current financial year even as it raised the forecast for developing Asian region to 5.9 per cent. In a supplement to its Asian Development Outlook (ADO) 2017 report, ADB revised the forecast for developing Asia from 5.7 per cent earlier. For 2018, it was raised from 5.7 per cent to 5.8 per cent.

10. India will reclaim its position as the fastest growing major global economy this year, partly propelled by benefits from a new tax system and bolstered by an expected central bank interest rate cut, a Reuters poll showed. Having been in the offing for close to two decades, the goods and services tax (GST), the biggest domestic tax reform since independence, was introduced on July 1 and has bolstered economists’ outlook.

12. Top Indian shot-putter Manpreet Kaur was suspended provisionally for her second dope offence after she tested positive for a banned steroid, just a couple of days after her first dope flunk.