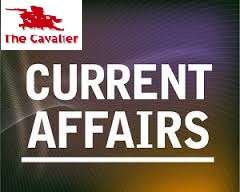 Posted by The Cavalier

1. Prime Minister Narendra Modi flagged off the maiden flight under the government’s regional connectivity scheme ‘Ude Desh Ka Aam Nagrik’ (UDAN). The Prime Minister inaugurated Alliance Air’s Shimla-New Delhi flight from Jubbar Hatti airport near Shimla. Alliance Air, a subsidiary of air India, has deployed its 42-seater ATR plane on this sector. Speaking on the occasion, Mr. Modi said, the flight will reduce the time travel from Shimla to Delhi and it will be cost effective. Mr. Modi simultaneously launched flights on Kadapa-Hyderabad and Nanded-Hyderabad sectors under the scheme. Mr. Modi called upon Airlines to start a Sikh circuit connecting important Gurudwaras.

2. The Supreme Court has said, Lokpal Bill is a workable piece of legislation and it is not justifiable to keep its operation pending. The apex court had reserved its verdict last month on a batch of pleas seeking the appointment of Lokpal in the country. The plea by NGO, Common Cause had sought a direction to the Centre to make the appointment of chairperson and members of Lokpal as per the amended rules framed under the Lokpal and Lokpal and Lokayuktas Act, 2013. As per the Act, the leader of the Opposition in the Lok Sabha is part of a selection committee which appoints the Lokpal. Other members of the committee are the Prime Minister, Lok Sabha Speaker, Chief Justice of India or his nominee and an eminent jurist.

3. Centre has realized around 20 thousand crore rupees so far under the Prime Minister’s Development Package (PMDP) for Jammu and Kashmir. This was disclosed at a high-level inter-ministerial meeting chaired by Home Minister Rajnath Singh in New Delhi.

4. India has successfully carried out a fresh user trial of 3,000 kilometre range Agni-III ballistic missile from Abdul Kalam Island off the Odisha coast. The Strategic Forces Command with logistics support from Defence Research Development Organization (DRDO) carried out the test from the Integrated Test Range. Defence sources said, the test was aimed at re-establishing the operational effectiveness of the weapon system.

5. NASA’s Cassini spacecraft has successful executed its historic first-ever dive through the narrow gap between the planet Saturn and its rings, marking the beginning of the ‘Grand Finale’ of the 20-year-long journey. The spacecraft is in the process of beaming back science data collected during its passage, through NASA’s Deep Space Network Goldstone Complex in California’s Mojave Desert. Jim Green, Director of the Planetary Science Division at NASA in the US, told that no spacecraft has ever been this close to Saturn before Cassini was programmed to collect science data while close to the planet and turn toward Earth to make contact about 20 hours after the crossing. Its next dive through the gap is scheduled for May 2nd. Launched in 1997, Cassini arrived at Saturn in 2004.

6.  President Pranab Mukherjee conferred the 52nd Jnanpith Award on eminent Bengali poet Professor Sankha Ghosh at function in New Delhi. He was awarded for his outstanding contribution in the field of literature. Speaking on the occasion, Mr. Mukherjee said, an ardent writer of Bengali poetry, literary works of Prof. Ghosh reflect a rare poetic style encompassing not only a lyrical style but also a deep reflection of the social milieu.

7. Kalpit Veerval has topped the Joint Entrance Examination (JEE)-Main with a perfect 100 percent score. The result of the exam conducted for admission to various engineering colleges were declared by the Central Board of Secondary Education (CBSE) in New Delhi.

8. Veteran Actor Vinod Khanna passed away in Mumbai on 27th April at the age of 70. He was suffering from cancer. Khanna was a sitting BJP MP from Gurdaspur constituency in Punjab and was recently admitted to a hospital.

9. Senior IPS Officer Rajiv Rai Bhatnagar has been appointed as the Director-General of the Central Reserve Police Force (CRPF). The CRPF was functioning without a head for the past two months after the retirement of K. Durga Prasad on February 28, 2017.

10. Shot putter Manpreet Kaur broke her own 2015 national record at the Asian Grand Prix in Jinhua, China. Her performance in the event has helped her to earn a gold medal and qualify for the World Championships to be held in London in August 2017. Her outstanding performance in the first leg of the Asian Grand Prix has helped her to reach No. 1 spot in the world rankings. Her throw has been adjudged as the best by any shot putter this year.