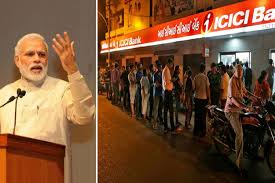 The demonetisation of Rs 500 and Rs 1000 notes announced by PM Modi on 08 Nov 2016 However, the more I read and hear debates on demonetisation, the more I feel that, the dividends that may accrue from this exercise may not be commensurate with the agonising harassment and loss to businesses.

The perishables are getting destroyed without filling anyone’s stomach; day to day running of households and small businesses/ farming sector has been severely disrupted.

We cannot compare ourselves with Sweden which has gone totally cashless. The reason is that every citizen over there has access to and is internet savvy.

In comparison, India has only 2.6 crore credit card holders and even the availability of card readers in shops and other facilities is just 14 lacs in the complete country with a population of 1.3 billion.

Demonetisation seems to be more of an exercise by the government to soak out the liquidity from the households and flush the cash starved banks with liquidity.

The primary reason apparently appears to be that the international credit rating agency ‘Fitch Ratings’ would downgrade India if it does not conform to the Basel III norms.

Basel III is an international regulatory accord that introduced a set of reforms designed to improve regulation, supervision and risk management within the banking sector.

The PSU banks in India have been seriously facing challenges as they suffer from poor capital buffers, thin capital ratios and weak prospects for raising capital through market channels.

The rupee has phenomenally fallen against the dollar. Naturally, the same hurts the competitiveness of exporters as their real income in rupee term goes down.

Therefore, RBI was buying dollars from the market to stem the rise of the rupee and, for every dollar it bought, an equivalent amount in rupees was injected into the system. Consequently, the Indian banking sector had a liquidity crunch.

The stress from increased capital requirement under the Basel norms had put further pressure on the Indian banking sector.

Remove Black Money from the System

In fact, 90% of this black money is parked overseas in tax heavens like Mauritius and Singapore. The balance is in the form of Benami properties and Gold. Interestingly, there has been a major surge in the import of gold since 9/11.

Secondly, government has recently allowed Rs 7000 crore of bad debts of State Bank of India to be converted into Non Performing Assets (NPA).

Similarly, bad debts and disproportionate assets acquired through corrupt means by absconders like Vijay Malaya and LalitModi are far from being recovered.

Besides, a lot of agencies like builders, CAs and even private banks are in full swing to help convert black money into white.

Thus, the objective of squeezing out black money from the market by demonetisation may not really curb illicit wealth.

The quantum of counterfeit currency in the system is a miniscule 0.028% of the total currency in circulation.

Moreover, there is no guarantee that the counterfeits of the new currency cannot be prepared. In fact, a counterfeit of Rs 2000 has been already recovered in Bangalore two days ago.

This massive exercise to print new currency at a colossal cost to fish out just 0.028% of counterfeit currency that can again be printed appears to be counterproductive.

It is a well known fact that the terrorists do not deal in cash, but invariably their funding is done through electronic transfers.

Thus, unless we have more stringent means to monitor electronic banking and tackle black money stashed in tax heavens, we will not be able to stop funding of terror outfits.

There is a UN Charter on preventive steps against terror funding that could be adopted. Demonetisation of the currency may not be an effective step to stop terror funding.

The most effective way to curb corruption is not by attacking the demand side of it, but the supply side of corruption.

The biggest reason for corruption to multiply in our country is the requirement of funding of political parties. The same indirectly, pressurises the executive also to become corrupt.

The big corporate houses are free to support political parties by paying in tax exempted money as party funds. Naturally, they would then demand favours from the government in return, ushering in corruption.

Secondly, the big black money-hoarders would have already devised means to convert their black money into white and the new Rs 2000 notes would only facilitate fresh hoarding.

The opposition has claimed that the government had secretly and selectively shared their decision of demonetisation and hence, a lot of black money from BJP and its allies was either disclosed under the Volunteer Disclosure Scheme earlier this year or was put into the banks to convert it into white or has been moved to tax heavens abroad.

The example being quoted is that of West Bengal BJP wing that put a crore worth of Rs 500 and Rs 1000 old notes into the bank, hours before it ceased to be a legal tender.

It is also widely considered that, while BJP has secured its financial position, the regional political parties have been effectively demolished.

The hype created about curbing black money and terror funding was used to gain popular support of the common people, who are willingly bearing the punishment on the ground.

The demonetisation is definitely a good step, however, the planning and execution of the exercise is seriously flawed.

It is sure to have some positive affects at least in the short and medium terms. However, I sincerely hope that the gruelling exercise is over soon and life comes back to normal for common people like us.