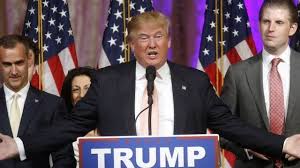 The Background: During the year 2016, two developments have terribly shocked the whole world: first, the exit of Britain form the European Union and second, the election of Mr. Donald Trump to replace Mr. Barack Obama as the new US President in January 2017. While legislative and other official actions are already underway for Britain’s exit from the EU, the world, especially US citizens, are yet to reconcile with the fact that Trump will lead the world’s most powerful nation in the next four years. The recent election of 45th US President has been unprecedented and certainly unexpected and fairly controversial on a number of counts. The losing candidate Mrs. Hillary Clinton described her defeat as ‘a loss painful for a long time’.

The Bitter Election Campaign: Prior to this election campaign, presidential elections in US were known for high quality debate and animated discussions on all developments impacting the world, especially American citizens. Unfortunately, this time the debate was not only acrimonious but involved personal attacks of a very low level. While a number of women openly came out and alleged that Trump had sexually abused them, Trump bitterly charged Hillary for leaking her official e-mails, which had national-security connotations. Russian President Putin too was accused of leaking Hillary’s e-mails to make things worse. He had allegedly done so, primarily to restore Russian-US ties, which are said to be in a crisis presently. Frequent personal character assassination and abuses were exchanged between Trump and Hillary, which lowered the dignity of US elections in the eyes of the whole world. All said and done, America would certainly not be proud of this US Presidential election.

How Trump won: Interestingly, Hillary won almost 200,000 votes more than Trump but lost under the US Electoral College system which awards all the seats from a state to the person who wins the state even if by a single vote. Out of 49 states of US, 29 voted for Trump to make him victorious, while 59.4 million people voted for him. Trump spent $5 per vote, which is half of what Hillary spent. 53% men and 41% women voted for Trump. Surprisingly, 55% of voters aged 18-29 voted for Hillary against only 37% for Trump.

Promises made during election campaign: It is presumed that below mentioned promises which were made by Trump, eventually contributed towards his victory.

In addition to the above, Hillary’s lack of connection with major voting blocks in the centre of the country did hurt her, women also did not support her as much as  was widely expected. Eventually, working class supported Trump, who were feeling left-behind in a changing economy of a diversifying country.

After the election: While Trump made tall promises, it is to be seen how much can he really achieve on ground. Trump has been vocal against out-sourcing of jobs, but welcomes highly skilled immigrants. He has openly spoken against globalization which may not be much welcomed by India. He has asked South Korea and Japan to counter China to make a multi-polar Asia, which India may favour. However, India keenly awaits President Trump’s response to pressurize Pakistan to end terror in the region.

A Divided America: Trump’s victory has come as a rude shock to Americans, since angry US voters have now elected an impulsive and thin skinned person as their next President and made him the world’s most powerful man. After the election, a large number of Americans protested calling him ‘not their president’. Recently, 1,100 CEOs of major companies have asked Trump to stop divisive rhetoric. Finally after the election, America has seen a definite decline in its status and credibility as a superpower, which it could certainly avoid.