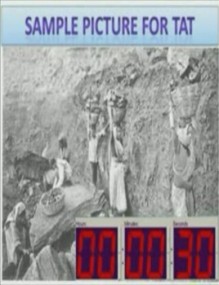 During one of my classes on TAT, a student while giving his feedback on TAT Story Writing,

made a very categorical statement. He said that “I thought TAT to be a process of writing a story on the picture shown.

In other words, this student is trying to say that he picked up the right approach of looking at the picture, as a situation,

involving self as the Hero and giving a meaning to the picture imaginatively.

This is a common mistake made by most of the candidates while responding to the picture, they tend to describe the picture and the characters therein, rather than taking on the role of a Hero, to deal with the situation in the picture thoughtfully. Be the Hero of the story and of your own life.