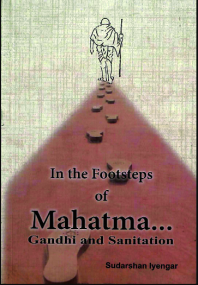 Gandhiji edited and contributed articles and notes to several periodicals. He wrote about sanitation and hygiene related issues frequently in Navajivan and Young India and later in Harijan. Insanitation in the villages and urban settlements in the country weighed heavily on his mind. During the Kheda Satyagraha; he wrote about the condition of home, pond and fields in regard to sanitation and hygiene in Navajivan of November 2, 1919. He wrote a series of articles under the heading Jagat no Tat - father of the world. His agony was that the farmer and his family lived in such insanitary and unhygienic conditions out of ignorance and lack of concern. Some of his observations were as follows:

We have also seen that the rules of cleanliness are not followed in villages. It is said that "cleanliness is next to godliness". There is no reason why we should be dirty or live in dirty surroundings. There is no sanctity in dirt! Filth is a sign of ignorance and sloth.

Gandhiji was more decent in using an expression ‘open evacuation’ in place of open defecation that is used in the national and international reports in present times! He pointed out in the article that not using latrines and open evacuation practice was the cause for many diseases. The old, children, sick and weak persons in the family and in the hamlets could not go out for evacuation and hence turned the courtyard, lanes or houses into latrines, dirtying the place and poisoning the air. He then recommended that people should build simple toilets or should have system of containers where method of covering the excreta with dry earth should be practiced with diligence.

In the issue of Young India, of November 19, 1925 Gandhiji in a way summed up his impression about sanitation situation in India. He wrote,

“During my wanderings nothing has been so painful to me as to observe our insanitation throughout the length and breadth of the land. I do not believe in the use of force for carrying out reforms, but when I think of the time that must elapse before the ingrained habits of millions of people can be changed, I almost reconcile myself to compulsion in this the most important matter of insanitation.”

In Harijan of February 8, 1935 he dealt with the subject compre-hensively. He made very pertinent observations about how Indians were oriented toward the habits relating to cleanliness. Although he never agreed, but was able to understand that the destitute, poor, and people of condemned class had come to accept insanitation as part of their lives. For others who did not suffer from economic backwardness had understood the importance of being clean and practice hygiene in their personal lives and in the houses they lived, but their indifference and guilt of commission at neighbourhood, village and town levels were high. In Gandhiji's words, the problem of sanitation and hygiene was at 'corporate ' level. Interestingly, Gandhiji in the article mentioned.

“Some foreign observers have testified that, of all the nations of the earth, India comes, perhaps, to the top in the observance of personal cleanliness.”

Gandhiji's writings impacted some people across the country to become voluntary sanitary workers in the villages. Their initial enthusiasm had setbacks. In reply to their letters Gandhiji wrote an article 'Problems Confronting a Sanitary Worker', in Harijanbandhu of October 27, 1935. The necessary condition to become a good sanitary worker, volunteering with loyalty was only a necessary condition. A sanitary worker had to perform the task in an enlightened manner, equipped with social and technical innovation.

Strangely, the human society that demonstrated to the world thousands of years ago about good sanitation management fell into deplorable practices. Handling human excreta for disposal became dreaded work and hence a taboo. Communities that were compelled to do it were relegated to the lowest step of the caste ladder of social hierarchy. Gandhiji abhorred this from his childhood days. The rural and urban communities continued to neglect their duty to sanitation and hygiene and compelled its handling to certain castes, condemning them to destitution. Ingenious person that he was, he used the nomenclature in practice to signify a professional doing the same work. He became a practicing sanitation worker and called himself by the same name that was used by the society to identify sanitary worker and the caste. He also created a community of such sanitation workers in Ashrams. And then in the issue of November 28, 1936 of Harijan he wrote an article 'The Ideal Safai Karyakar '.

Gandhiji argued that if the Indian society had given due recognition and status to the sanitary workers' communities deservingly equivalent to that of Brahmin, Indian villages would have been clean and sanitised. Describing the qualities of an ideal sanitary worker Gandhiji wrote the following:

“What qualities should such an honoured servant of society exemplify in his person? ... (he) should have a thorough knowledge of the principles of sanitation. He should know how a right kind of latrine is constructed and the correct way of cleaning it. He should know how to overcome and destroy the odour of excreta and the various disinfectants to render them innocuous. He should likewise know the process of converting night-soil and urine into manure... That presupposes a scientific knowledge of the requirements of his profession. He would likewise be an authority on the subject of disposal of night-soil in small villages as well as big cities and his advice and guidance in the matter would be sought for and freely given to society. (he) regard(s) the maintenance of healthy and sanitary condition within the same as the summum bonum of his existence.”

These are the qualities of a thorough professional sanitary worker working in rural areas even today. Gandhiji wrote about the lack of good instruments and equipment to handle excreta and dirt. After eighty years of Gandhiji's clear vision of professionalising the sanitary work, we have failed to put it in action on the ground particularly in villages and urban slums and in old city settlements. Gandhiji's concern with sanitation continued and one is able to find a small note in the issue of August 18, 1946 in Harijan titled 'Limit to Insanitation'. He was upset by the insanitary conditions of Panchgani where he went to spend some time to convalescence. A place such as Panchgani known for health recovery and also Mahabaleshwar, an adjoining health resort, both had high degree of insanitation. He lamented the deplorable condition and said that the main fault was with the people. In South Africa he had partly admitted the duality in behaviour of Indians about hygiene at individual and collective levels with great mortification, but in 1936 he made frank and full admission and wrote  ‘the truth of it has to be admitted with Sorrow'. We, Gandhiji's countrymen and women, have still a very long way to follow.

Excerpts from the book In the Footsteps of Mahatma ... Gandhi and Sanitation written by Sudarshan Iyengar, published by the Publications Division. The book can be purchased online from publications division.nic.in @Rs. 100 and e-version@ Rs. 75.