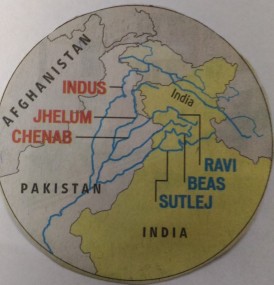 Pakistan’s proxy war against India has continued unabated for a very long time now. But, India’s patience ran out recently, when on 18 Sep 2016,Pakistan based militants killed 18 Indian soldiers at Uri Army Base. Consequently, Indian Army carried out well-planned surgical operations to demolish some terrorist bases across LOC.At the same time, India expressed its intentions to reclaim its right over J&K rivers. Presently, water resources in J&K have been shared between India and Pakistan through the Indus Water Treaty. “Blood and water cannot flow together”, Indian Prime Minister said recently.

This treaty was signed in 1960 between India and Pakistan and was brokered by the World Bank. The agreement gives control of the three eastern rivers – Beas, Ravi and Sutlej to India and Indus, Chenab and Jhelum to Pakistan. All the rivers either originate or pass through J&K. The pact is seen as generous to Islamabad, as it gives Pakistan 80 percent of the water of the Western rivers: Indus, Chenab and Jhelum. As Indus was the biggest of them, the treaty was named as Indus Waters Treaty. The treaty gives Pakistan more than four times the water available to India.

Despite the fact that this treaty apparently favors Pakistan, India did not rake up the issue of sharing water resources, primarily to maintain peaceful relations with Pakistan. But, looking at Pakistan’s stance against India for a very long time, Pakistan should not expect the Indus Waters Treaty to survive eternally if it refuses to honour the 1972 Simla Peace Pact with India. Therefore, India maybe well within its right to take more water from Indus, and consequently squeeze Pakistan. If India builds infrastructure such as hydel power projects and irrigation canals to optimize its use of rivers, even within the treaty’s framework, the water flow to Pakistan farmers will be considerably reduced. The current situation has taken this ugly turn since repeated cross border terrorist attacks and Pakistani establishment’s refusal to acknowledge that such strikes originate from its soil, have forced India to use the water treaty as the bargaining tool to force Pakistan to mend its ways. But, the core issue now is whether scrapping of the pact would be a credible deterrent for Pakistan?

Experts opine that India needs to consider the following aspects before taking requisite steps to scrap the treaty:

Secondly, if India walks out of this treaty, our country would lose overall credibility among international community in the long run.

Thirdly, in support of Pakistan, China could also decide to divert waters of river Brahmaputra.Moreso, since India has no water treaty with China pertaining to Brahmaputra river presently, and of late, China is openly favoring Pakistan.

Fourthly, India could utilize the provisions of the Indus treaty more aggressively to favor J&K and other states of India, since considerable unused waters of the eastern water flow into Pakistan unutilized.

In view of the above, within the provisions of the Indus treaty, India could revisit the Indus Treaty to utilize more water for India after taking adequate diplomatic measures to inform the international community, and at the same time, plan a long-term strategy in this regard. Presumably, a strong message has already gone to Pakistan that India could take recourse to hard measures of diverting more water for India, if Pakistan does not mend its ways.