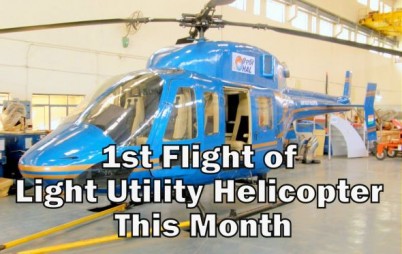 Hindustan Aeronautical Limited (HAL) successfully completed the first test flight of its Light Utility Helicopter (LUH) earlier this year in September. The LUH that was test flown was an indigenously developed prototype helicopter.

With LUH, India has built capabilities in the light category of helicopters to serve both armed and civilian needs. HAL has its workhorse chopper Advanced Light Helicopter, the 5.5 tonne twin engine chopper that is being used by the armed forces and has built the Light Combat Helicopter - India's helicopter gunship that is undergoing trials for certification.

The test flight took place in Bengaluru and the helicopter hovered in the air for 15 minutes. HAL termed its first flight to be “flawless”.

The twin-engine Dhruv ALH, which is a five-tonne class helicopter, was initially sold by HAL to the military for about Rs 40 crore, but the current order is likely to be priced at Rs 65-70 crore ($10 million). By that yardstick, industry analysts estimate the smaller LUH would be delivered at about Rs 40 crore per piece; and the 200-helicopter order would be worth Rs 8,000 crore.