RAFALE DEAL: WHAT IT MEANS FOR INDIA 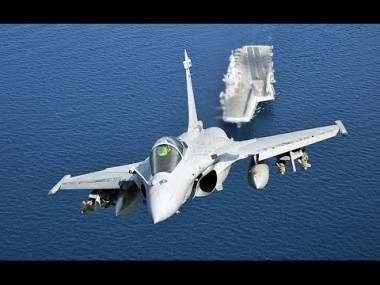 The decade-long saga will bear “some” fruits when India ultimately signs on Friday a deal with France for 36 Medium Multi-Role Combat Aircraft (MMRCA) Dassault Rafale fighter jets. Note the deliberate use of the word “some”, as the original intention was to procure 126 of such aircraft to begin with and possibly 63 additional aircraft at a later date.

The deal that is to be signed will cost India about Rs 58,000 Crore or so (7.8 billion Euros) for 36 off-the-shelf Dassault Rafale twin-engine fourth generation multi-role fighter aircraft, 15 percent of which will be paid in advance. The MBDA Missile Systems of France will supply the weapons package, and that country’s Thales Group will be responsible for the fighter jet’s avionics. It is also understood that the first Rafale warplanes are slated to be delivered roughly within 18 months of the signing of the final contract, during which suggestions of the Indian Air Force (IAF) for any customised version of the aircraft, including modifications and reconfigurations, to allow the installation of Indian-made and commercial off-the-shelf systems and weapons will be taken into account.

What is a Rafale fighter jet?

The twin-engine Medium Multi-Role Combat Aircraft, Rafale is the first – and so far, the only – European aircraft with electronic scanning radar.

Apart from Israeli helmet-mounted display, the weapon systems will also include the new-age beyond visual range missile 'Meteor' which is capable of hitting the enemy aircraft and its missiles from more than 100 km away.

Initially, the process of procurement began in 2007 by then Defence Minister AK Antony, who had approved the Request For Proposal to buy 126 aircraft.

However, apart from the change in governments in both the nations during the ongoing negotiations, the price of the aircraft was also an issue which was later scaled down by 20 percent.

Why is Rafale deal so important to India?

According to The Indian Express report, a Rafale fighter jet is expected to be used in an 'airborne strategic delivery system'. Simply put, these Rafale fighter jets may be used for the delivery of nuclear weapons during a strike role.

India has been able to save over €590 million through tough price negotiations which began in January this year.
Though the deal could have been firmed up earlier, issues like pricing and offsets took time as India wanted a better contract.

This means creating business worth at least three billion Euros for Indian companies, both big and small, and generating hundreds of jobs in India through offsets.

Last month, a report submitted by the team negotiating the Rafale deal with France was cleared by the Defence Ministry. The file was then sent to the Prime Minister's Office for review and clearance.

The price of the deal was brought down from nearly 10 billion Euros, as sought initially, due to various reasons including tough negotiation by India, the discount offered by the French government and reworking of some of the criteria.

During his visit to France in April last year, the prime minister had announced that India would purchase 36 Rafale jets in a government-to-government contract.

Soon after the announcement, the defense ministry had scrapped a separate process that was on to purchase 126 Rafale fighter planes by Dassault Aviation.

The delivery of the fighter aircraft is expected to begin in 2019, with an annual inflation capped at 3.5 percent.

In the flip side Rafale aircraft will add to the logistics challenges for the Indian Air Force which is already operating aircrafts from Russia and NATO origin. However, France has agreed to carry out performance based logistic support. At all times 75% of the fleet will be Airworthy.

The Air Force still has to look to fill the gap of 9 more squadrons that it needs.