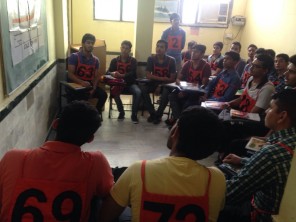 CONDUCT OF THE GROUP DISCUSSION:-

• The GTO will conduct two GD’s, one after the other, with a very small time gap between
the two. Both GD’s will be of 15-20 minutes.
• The GTO will give two GD topics for the first GD but candidates have to decide within one
minute, the topic which they would like to discuss.
• While choosing the topic, the candidates must decide the topic based on its relevance to them
and also on the currency of the topic.
• The second topic is decided by the GTO himself, based on the  performance of the group.
• Both topics are common in nature and do not require any specific knowledge, facts and
figures.
• The topics are given in a descriptive form and list out three (some times four) options; a  candidate has to discuss
the option that he/she finds more apt as compared to the other options.
• All options are workable. The candidate has to express as to which amongst all options is
better as compared to the others.
• The fourth option is ANY OTHER, the candidate need NOT be stuck with the three
provided options, he is at liberty to proceed with any viable option coming to his/her mind.

·It provides more and effective power to the youth.

·It has increased threat to the National security and peace

·Any other country you dream fit

The GTO looks for the following in the candidates Personality:-

Participating in a friendly manner.

Effective communication results in getting the attention of the group members. If you communicate well, then your point will be given weightage and everyone will discuss around your point. So you become the centre of attraction. After the group seems to conclude about your previous point, try to give a new point and do not keep harping on one thing.

Make the G.D. as GD and don’t turn it into  a debate. don’t always comment negatively about others point, even though it is wrong, overcome that negative aspect  with a positive point. Of view It leaves  a better impression on the GTO. After giving your point, just listen to the group member who is speaking and if you get a change in that give a point supporting your previous point. (merging your previous point and the current point presented by the group member) you are at liberty to do so..

While someone else is presenting his/her view, we can always find methods to interject by using some phrases like:

• Excuse me, gentlemen, I have something to say
• Excuse me, gentlemen, I agree with your point but want to add one
more point.
• I agree with your point, but there is another way of looking at it.
• Excuse me , My solution for this issue is (while two members are
debating try to give a solution, this gives you a credit. Since the real
leader is one who finds the solution to the problem).

Listening to the group members point of view:-

The candidate should be accommodative to ideas expressed by others. One should not be rigid about ones ideas own. One can be assertive but only up to a point, adjusting to new ideas and people in an unfamiliar environment is an important quality. Your adaptability will come to light if you keep above in mind.

A good leader should also be a good listener. It always pays to be receptive to others point of view as well. It is not the volume but the contents of what a candidate speaks that matters. One should speak sufficiently and not be too verbose. By listening to others you will:-

• Be able relax and put your mind to fresh points.
• Be able to pick up hints and add more points by either supporting,
corroborating or opposing others point of view.
• Be able to work out essence of others points and may be able to give a
conclusive point.
• When you listen to others, others listen to you.

Leadership and Coordination with the group members:-

The ability of a person to be able to generate a following and leave a mark of ones presence on the group, the skill of being able to convince other members about ones convictions and then being able to motivate them to become a contributor to the group, a good leader will be able to coordinate the thought process of the group in to a progressive discussion.

In G.D. leadership quality is analysed by the G.T.O. by noticing the:-

• Initiator of the group,
• Listener of the group,
• Person helping the silent/hesitant member to talk,
• Supporting  the good point of  other  group members.
• Ability  to analyse and prioritise the good point from other  members
of the group
• Explaining others point by giving his/her own example,
• Ablility to overcome  equally competent candidate(s) with his/her depth
of knowledge and communication skills.

Expressing Oneself Truthfully and Logically in the group:-

Capability of a candidate to defend ones position and being able to hold onto ones conviction becomes essential but it should not be at the cost of being adamant.  If the candidate is truthful he will also have conviction which will be visible to others. Logical means correctly understanding the topic and presenting a balanced point of view. Logical person takes objective view of both sides of a point before arriving at a conclusion. A logical person will also not get carried away by emotions in a discussion.

Depth of Knowledge on the given topic:-

In a GD the quality of what you speak matters. To be a good participant in GD we should have a  sound knowledge of  the given topic. Seeing various discussions on national news channels  specially in English  and reading editorials in national dailies will help improve your depth of knowledge .

Academic knowledge is a requirement. What is more important is the  ability to  utilise this factual knowledge in a manner in which the candidate shows his/her analytical approach to a topic. His /her ability to see through in the essence of the topic through the maze of information and the effective intelligence to use the knowledge in carrying the group along. Is what matters.

Sharing of knowledge with the group members and willingness to learn:-
The candidate has to share his knowledge and experience with other members of the group during the discussion. The GD is not meant to see the ability of the candidate to somehow convince everyone on his point of view. What is seen is his ability to carry the group along by sharing and enhancing knowledge and also in the process showing the ability to learn from other candidates.So that the GD is a process of mutual growth and not about individual ideas being thrown around.

There are several techniques in the initiation of group discussion. These are

This is very basic initiation technique followed by most of the persons in G.D. i.e. if the topic is given the G.T.O is about “India’s Space Programme”, then the candidate may start the discussion by explaining to the group that space programme of India would  involve talking about the Launch vehicles and the Satallite Programmes seperately. So he is defining the topic by giving the direction in which  the team members need to go to build up the point and discuss.

This is very interesting technique followed by some candidates in G.D. i.e. asking interrogatory type things such as what, when, who, how like question about the given topic. This technique has the disadvantage of throwing away the initiative to someone else. The actual point comes from others and not the initiator .However, it at least gives an opening to the candidate to speak. These methods should be adopted sparingly if possible be prepared with answer also.

Let we take the topic “NUCLEAR REACTOR IN INDIA”, in this topic if the candidate starts the discussion with why India wants a nuclear reactor rather than choosing a alternative source for power? After telling this he should be able to support his point by giving positive points such as, what was happened in Japan due to nuclear reactor. (Like this even though the starting seems to be negative he finishes the topic by giving a strong positive point, i.e he gives importance to the people of Bharat rather than power production, Also he is not leaving about power production, he also gave in his point to find an alternative solution). So this is a good initialisation.

Starting with hot issues and sailing over that technique:-

This is an interesting technique, giving a hot topic and social welfare topic such that every one will get little more interest to discuss about this.For example:

If the given topic is about“Preservation of wild life in India” The candidate could start the topic by Bringing out the HOT Issue of Some VIP’s  currently involved in the killing of someendangered/protected species  of animal and then progressing his point of view. This will invite everyones attention to the candidate and also his point of view.The  candidate should guard against  taking the issue too much on the negetive side .

• First listen to the G.T.O. keenly and try to grab the essence of what
GTO is reading out.
• If you have knowledge about the topic and good effective
communication then start the discussion.

Else be patient and wait for the opportunity and be guide to participate summarize your point in your mind then trigger it into the discussion.

• Keep proper eye contact with the group members who is talking and
don’t ever look to the G.T.O.
• Have a depth knowledge in basic topics and national issues as it be easy
for you cross the group discussion like a cake walk.
• Don’t ever make a debate in the discussion by joining hands as two or
three person with in the group itself, then all will lose all your chances
of getting selected.
• To be best read news papers, see discussion at national news channels
also discuss with your class mates, friends in English to avoid
stammering and to get flow of points in mind even in pressure.