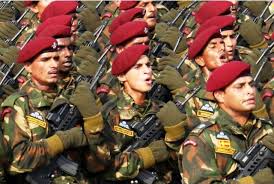 Territorial Army (TA) in an integral part of Indian Army. It’s based on the concept of having a trained force readily available ‘During War’, if required, which is maintainable during peace time at very low cost. Territorial army enables ‘Motivated Young Men’ to serve the Nation in two capacities as Civilian and as a soldier. No other profession provides such an expanse of experience. It is an ideal platform for employed youth who are not in the regular forces but have a passion to serve in the forces. Their love for the country helps them to contribute their might for defence of the country when duty calls.

Faculty – All qualified faculty with minimum 5 years of teaching experience

Batches Start from 3rd and 18th of EVERY MONTH

HOW TO JOIN TA AS OFFICER

All desirous civilian candidates can obtain APPLICATION FORM, from EMPLOYMENT NEWSPAPER or download from www.indianarmy.gov.in (FREE OF COST) and send it along with self addressed stamped envelope of 28 x 12 cms size, two passport size photographs and postal stamps worth Rs. 12/- (Rs. 25/- for J & K) affixed on envelop (NO OTHER COST FOR SUBMISSION) to the respective TA Group Headquarters as per the area.

NOTE: Candidate who passed written test of PIB are required to bring the following attested documents by a Gazetted Officer at the time of interview:

Self-employed candidates or having own business are required to submit an Affidavit on Non-Judicial stamp paper of minimum value duly attested stating nature of self-employment and income earned annually.

FOR EX SERVICE OFFICERS ONLY

Syllabus for Exam, No of Questions & Marks

Type of Exam: Objective (OMR Answer Sheet will be used).

Qualifying Marks: The Candidates will have to score minimum 40% marks in each paper separately and have an overall average of 50% to qualify.

Penalty for Wrong Answers: There will be penalty imposed for wrong answers marked by a candidate as under:-

The above change will be implemented with effect from the PIB August 2016 onwards.

Successful candidates on clearing PIB will further undergo SSB and Medical Board before final selection.

EMBODIMENT FOR TRAINING IN TA

1. One month basic training in the first year of commission.

Following are the types of TA units-

Certain state Govts and departments give the following incentives to their employees: