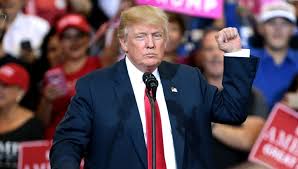 Donald Trump emerged as the 45th President of the United States of America contrary to the popular perception. He is known to be a headed strong person, who is a shrewd businessman.

Trump is highly unpredictable, believes in the political ideology of populism i.e. virtuous citizens are mistreated by a small circle of elites, is extremely loud and his sense of nationalism is unquestioned, though queer.

The above attributes make him, if nothing else, a dangerous person to fill the office of President. One thing is for sure, that the impact of a Trump presidency will be felt far beyond the borders of the United States.

Donald Trump promised during Election Campaigns to lower the corporate tax rate from 35% to 15%.

The implication of the above would be that US would become an attractive destination in the world for businesses, as it would offset the advantage of cheap labour against tax cuts at home.

Conversely, it would also mean that American businesses that have set shop in other countries to improve their profitability by paying less tax, e.g. Ford Motors in India would like to pull back a part of their business, if they get this additional benefit at home ground.

Thus, it would be bad news for India as it could lose jobs and revenue.

However, besides lowering the corporate tax rate, he plans to cut federal expenses and ease regulatory frameworks for businesses, so as to give a boost to the US economy.

The same would mean enhanced opportunities for not just big businesses in India, but also smaller ones to invest in the US.

The EB-5 visa programme being proposed by US, which is likely to find favour with many Indian investors, requires an investment of $ 1million and create at least 10 jobs for American workers to get the much coveted Green Card.

Thus, the ever growing list of Indian millionaires (nearly, 2.5 lac as on date), will find greater opportunities to live their “American dream”.

Trump has been extremely unambiguous about curtailing immigration. Though his attacks were more directed towards Mexicans, his views on restricting skilled workers to take up American jobs, could spell trouble for Indian techies.

Companies like TCS, Infosys and Wipro have employed a large population of Indians. In fact, in 2014, Infosys alone filed more than 24000 Labour Condition Applications (LCA) required to obtain these visas.

Besides, many US companies operating in India have been sending their staff to US, simply because Indians are cheaper to employ as compared to American workers.

However, the above said call had been given by most American Presidents before elections, but later found it hard to implement, as they cannot beat India’s technical prowess and “flexibility” of workers to shoulder additional responsibilities.

Presently, energy starved countries like India are at the mercy of the Petroleum Exporting Countries (OPEC) and any rise in the price of fuel bleeds India’s domestic oil companies, throws the government’s fiscal deficit targets out of gear and leads to a spike in the prices of essential goods.

Donald Trump has promised to unleash America’s shale oil, natural gas and coal reserves to make US energy self-sufficient. He has further declared to open onshore and offshore leasing on federal lands and lift the moratorium on coal leasing.

Opening up of the US oil sector could lead to price stability globally. It could also throw open massive business opportunities for Indian oil companies including the state owned Oil and Natural Gas Corporation of India (ONGC) to invest in oil and gas exploration in US.

India’s biggest exports to the US are in the sectors of Gems and Diamonds, followed by Pharmaceutical sector, which is alone pegged at $66 billion.

India’s strength in manufacturing affordable generic drugs complemented the objectives of Obamacare, which was signed as a law in 2010 and aimed at providing affordable healthcare to American citizens.

Donald Trump plans to scrap the Obamacare scheme. Consequently, not only will the business of Indian drug companies be adversely hit, but also, the Indian IT companies which provide support to the program could also end up losing their business that could lead to job cuts in India.

Both, China and Pakistan have been using the US as a cash cow for decades: China by running a huge trade surplus ($366 billion in 2015); Pakistan by being one of the top recipients of US aid (more than $30 billion since 2002), while pretending to fight radical Islam.

There appears to be a good possibility that Donald Trump will take major steps to restrict the flow of cash in this direction.

Implications for Pakistan: Trump has used very strong words while highlighting the need to curtail the influence of ISIS and curb immigration from countries that export terror.

Trump has talked about his very controversial plan to establish a ‘Commission on Radical Islam’ and launch an ideological offensive that includes using the media as an instrument to inform people about the core ideology and convictions of radical Islam.

The restrictions imposed on immigration on the above said grounds will severely hurt Pakistan by exposing its nefarious designs globally.

Trump has called Pakistan “probably the most dangerous country” and has said that “you have to get India involved; India is the check to Pakistan. I would start talking at that level very very quickly”.

The above statement is in sharp contrast to the erstwhile approach of US in dealing with Pakistan and the issue of terrorism prevailing in the sub-continent.

In other words, he seems to imply that, Pakistan is a problem, and India is part of the solution to that problem.

Implications for China: Donald Trump has labelled China as a ‘currency manipulator’, who steals American jobs and illegally manufactures items over which US has a patent right.

He has called for imposing higher tariffs on Chinese goods, initiate litigation against China for stealing American trade secrets and bring trade cases against China at the World Trade Organisation (WTO) to force it to cut down its trade subsidies.

Trump has vowed to offset China’s labour cost advantage in manufacturing with a combination of tariff and non-tariff barriers.

Such a move would come at the worst possible time for China, when a decade’s long credit-fuelled investment boom may finally be turning to bust.

The Chinese manufacturers, who have produced goods on borrowed money, when imposed with higher tariff, will not be able to sustain themselves. Consequently, the growth rate of Chinese economy will sharply fall and may even lead to recession.

Hence, curtailing business with China could open up more possibilities for diverting a part of the US trade to India, which China would lose.

The Modi government, over the course of Donald Trump’s campaign during the past several months had been very wisely reaching out to the members of Trump’s team.

India Inc has been quite active to propagate and remind Washington of India’s contributions to the high-technology sector and the fact that Indian businesses actually create jobs in the US.

Besides, the converging ideologies and needs of Indian leadership and that of Trump administration about the common threat of transnational terrorism and curtailing inept trade practices would further cement Indo-US Relations.