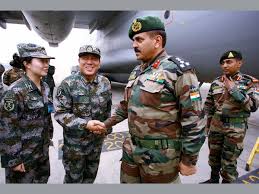 The Background: Right from the days of “Hindi-Chini Bhai Bhai” when Nehru was India’s PM, India-China relations have seen several ups and downs. Recently, we witnessed yet another low in our relations with China. While China continued to block India’s bid seeking membership of the Nuclear Suppliers Group and UN Security Council and stonewalling India’s attempt for sanctions against JeM Chief Masood Azhar at UN, India boycotted China’s Belt and Road forum in Beijing in May 2017, even though 29 world leaders did take part in this forum. India’s objections were based on the fact that China-Pakistan Economic Corridor (CPEC), which is an important part of this project, passes through Indian territory presently illegally occupied by Pakistan.

Recent Developments: On 16th June 2017, China started constructing road using heavy equipment accompanied by People’s Liberation Army (PLA) of China in Dolam’s plateau in Bhutanese territory. Bhutanese army soldiers could not stop China, and subsequently, Indian Army moved into the area and stopped the road construction. India took this action since this action of China violated pact between India and China and also posed threat to India’s strategic interest in the region due to its location in the India-Bhutan-China trijunction area in Doklam. Action of China was clearly in contravention of 2012 agreement that trijunction boundary points are to be decided through consultations between all three parties. India was thus forced to intervene as Chinese side brushed aside Bhutan’s protestations.

Consequent to the stand off which continued for 72 days, both Armies maintained their positions, while active diplomatic efforts continued to end this face off. During this period, China used its media to build ample psychological pressure on India by asserting that India has occupied Chinese territory, which India denied repeatedly. During this period India purposely did not respond to China’s threats but, at the same time, remained firmly stuck its position on the basis of legal principles and past agreements. India was well aware that dragging the dispute would not favor China in view of the BRICS summit from Sep 3rd, 2017 and a major Chinese Communist Party Congress in few months, where Chinese President is seeking a further 5 years term. All these factors compelled China to resolve the Doklam issue without appearing to concede much. Finally, on 29 Aug 2017, both parties agreed to withdraw their forces to maintain the status quo.

Conclusion.   China continues to display its military power and ambitions to display its military power and intentions to dominate in the Asian region. However, the recent stand off has conveyed to India’s neighbors that India is not willing to be brow beaten by China and will stand up for its friends, if need arises. It is also a timely massage to Pakistan that China can be challenged and has some limitations. However, India needs to be careful that China might instigate Pakistan to push up its terror activities against India and show Chinese military power in the Indian Ocean.